Teens who identify at least one influential, "natural" mentor in their life - a person not assigned by a formal mentoring program - report that they have a higher sense of self and are more likely to take risks that affect their lives positively, according to data recently released by SADD (Students Against Destructive Decisions) and Liberty Mutual.

Teens who identify at least one influential, “natural” mentor in their life – a person not assigned by a formal mentoring program – report that they have a higher sense of self and are more likely to take risks that affect their lives positively, according to data recently released by SADD (Students Against Destructive Decisions) and Liberty Mutual.

According to the Teens Today study, 46 percent of teens with a mentor reported a high sense of self versus 25 percent of teens who did not identify a natural mentor in their life. Additionally, teens with mentors reported that they are significantly more likely than teens without mentors to challenge themselves by taking positive risks (38 percent versus 28 percent), such as joining an athletic team or volunteering to perform community service. Notably, more than half of teens (56 percent) say the absence of a mentor would negatively affect them.

Natural mentoring occurs outside of a formal mentoring program that may match teens with a dedicated mentor. Natural mentors can include family members (such as parents, aunts, uncles, and grandparents), other adults (such as teachers, guidance counselors, coaches, neighbors, clergy) and peers – people who may have opportunities for interaction with some frequency.

More than 3,300 middle school and high school teens across the country were surveyed in the study, which was brought to my attention by Liberty Mutual in its role as a College Parents of America partner.

The study also reveals that the breadth and depth of mentoring – the number of mentors teens have or the range of topics teens can discuss with a mentor – significantly influences decisions teens make around drinking, drug use, and sex.

“This new research demonstrates that there are a whole host of opportunities for adults to influence teenagers outside of formal or planned mentoring programs,” said Stephen Wallace, the chairman and chief executive officer of the national SADD organization who also has broad experience as a school psychologist and adolescent counselor. “We see this research as a call to action to adults who interact with teenagers – either in their professions or in their daily routines. This research shows that adults who make extra efforts to connect with teenagers can have a profound impact in guiding our nation’s youth.”

Well said, and one of the many reasons that we wanted to bring this study to your attention.

According to the study, 35 percent of teens with no mentor have a low sense of self (versus 12 percent of mentored teens). Teens Today research identifies sense of self as teens’ self-evaluation on their progress in three key developmental areas: identity formation, independence, and peer relationships.

High sense-of-self teens feel more positive about their own identity, growing independence, and relationships with peers than do teens with a low sense of self. They are also more likely to avoid alcohol and drug use. Teens struggling with those developmental areas, on the other hand, are more likely to drink, to use drugs such as ecstasy and cocaine, and to cite boredom and depression as reasons to have sex. They also note a greater susceptibility to peer pressure when making choices.

The study reports that teens with no mentors are significantly more likely to shy away from positive risk-taking than are their mentored peers (51 percent versus 31 percent).

While there are many reasons that I thought you would wish to know about this Teens Today report, one of the most important is the manner in which the study reveals how teens rank the most influential people in their lives. Family members, friends, teachers and counselors top the list. The characteristics young people tend to ascribe to them include trustworthy, caring, understanding, respectful, helpful, dependable, fun, compassionate, and responsible. Being a good listener and offering good advice were also seen as key skills of successful mentors.

While parents clearly play the most influential mentoring role in the lives of their children, it is also clear that peers and other “significant” adults can, and do, affect important developmental outcomes. SADD and Liberty Mutual provide the following tips for parents to facilitate mentoring.

For more information on this and past Teens Today studies from SADD and Liberty Mutual, please visit www.sadd.org or www.libertymutual.com. 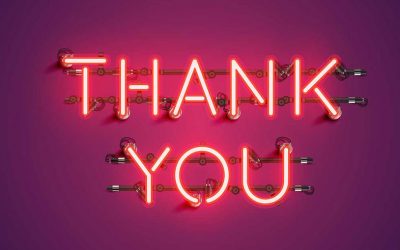 As each week goes by in Washington, it becomes clearer that a legislative fix is unlikely to solve the college-cost conundrum.Not only are legislators distracted by pressing issues such as hurricane relief, the war on terror and the latest Supreme Court nominee, they appear to have quietly determined that there are other ways to address college costs besides the use of a big stick from Congress.Now that is not to say that the college cost issue has gone away.

If you have heard about 529 plans, you may be overwhelmed with the overload of information that is available on them and somewhat confused on which 529 plans are best for your family. First of all, it is important to know what the key benefits of 529 plans are and how they compare to other college savings plans, as well as learn the impact of 529 plans on financial aid and scholarships. 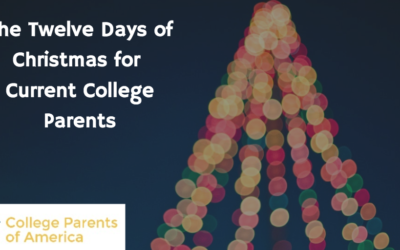 For current college parents, the twelve days of Christmas don't end with a partridge and a pear tree. In fact, the year-end holidays don't seem to end at all. Increasingly, colleges and universities are scheduling longer and longer periods of time between the last day of fall finals and the first day of spring semester. Beginning as early as mid-December, those of you who are current college parents began to have your sons and daughters come home for the holidays. 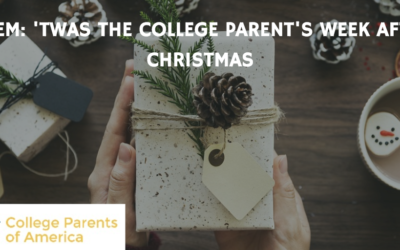 This is one of our favorite early contributions from an editor of College Parents of America. Enjoy a poem in good humor for college parents and families around the nation.