College Parents have a natural interest in the campus safety and security of their students. The Clery Act is a great example of how the expectations of parents can transform public policy and provide greater transparency for students and their families.  The law is named after Jeanne Clery, a 19-year-old Lehigh University student who was raped and murdered in her campus hall of residence in 1986. Her murder triggered a backlash against unreported crime on campuses across the country. The Clery Act requires all colleges and universities that participate in federal financial aid programs to keep and disclose information about crime on and near their respective campuses.

Despite the requirement to disclose accurate crime statistics and potential fines of $35,000 per report violation, it appears that 30 years after the death of Jeanne Clery colleges and universities continue to struggle to comply with providing accurate crime reports. In fact, this past November the American Association of University Women (AAUW) published an alarming report that concludes that ninety-one percent of the nation’s colleges have told the federal government there were no rapes reported on their campuses in 2014.  In contrast to other reports that indicate sexual assault rates of women may reach as high as 21%, AAUW correctly concludes that this analysis of campus reported data “defies reality.”

A Washington Post article of the AAUW’s appearance at the National Press Club, “assailed the federal Clery Act data, information that colleges are required to disclose about sexual violence on the nation’s campuses, including the number of sexual assaults and rapes. The AAUW said it appears colleges must be concealing such cases because there is ample research and recent polling and survey data that shows college sexual assaults are a frequent and widespread problem that touch campuses from coast to coast.”

This data provides little comfort to college families evaluating the safety of their student’s campus.  According to GradGuard, (a service provider of College Parents of America) “the issue of accurately reporting campus safety and crime statistics goes beyond issues involving sexual assault.   A quick analysis of the 2014 Clery Act reports of private 4 year colleges and universities with more than 1,000 students would indicate that there are approximately 3 burglaries per campus reported within university residence halls. But averages are often misleading. 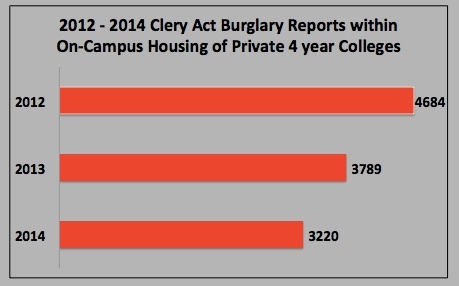 In fact, 43% of these schools reported ZERO burglaries while at the same time, 35% of schools reported more than 3 burglaries and these same schools actually account for 89% of all reported burglaries.  Is it true 43% of school with residence halls had no crimes or could there be a problem with reporting? And is it really true that 371 of these same institutions (4 year non-profit private institutions with 1,000 or more students with residence halls) also reported no burglaries in 2012, 2013 and 2014?  The Clery data seems implausible.”

What else do you suggest?  What is your experience?  Please contribute your ideas and suggestions for how else college parents can overcome the problems associated with inaccurate crime / Clery Reports.